When dealing with depictions of 16th century women and fashion for more than ten years, its only a matter of time before one encounters a strange detail in some of the female clothing: depictions of women with their mouths covered by a piece of linen attached to their headgear. A reoccurring example of this is two women seen in the train of a military unit, from 1530, and they have caused both discussions and theories:

To the far left we see a woman with her mouth covered, friendly held by another woman in a big hat and a little dog under her arm:

To the far right we find an almost identical headgear with the mouth covered, this time worn by a woman with a walking stick and yet again a little dog as company:

As far as I can remember, at least in Sweden, these strange face coverings have been explained as simply covers for dust and dirt. This can definitely seem logic at first glance. But if this would be the case – how come we don’t see these “dust covers” a lot more often worn in trains for the army during this period? And never on men or children?

The “dust cover” theory does seem more improbable when you encounter quite different depictions of 16th century women with covered mouths. Firstly they depict women in entirely different situations where dust and dirt can hardly be the reason for covering their mouth. Secondly they depict higher class city women who are the very opposite from the socially low ranked women in the army trains. These women, often on their way to or in church, do they really need to protect their mouths from dust & dirt? Let me give you a couple of examples: 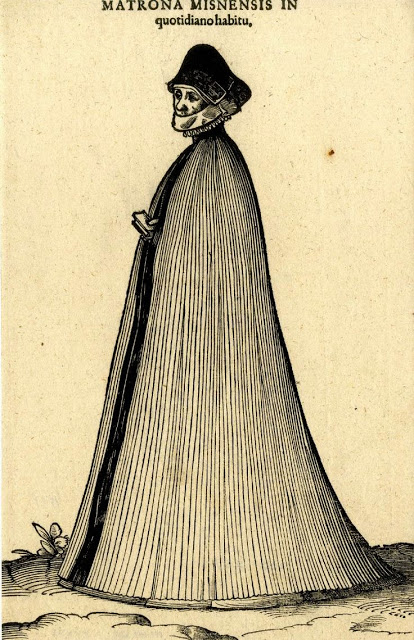 In the Wavel Castle, in Krakow Poland, there is a 16th century head bust in the ceiling that depicts a woman with the very same covered mouth. It was here I first heard the explanation that this woman was having her mouth covered as a sign of grief – shes was a widow, they claimed. Here is a small replica of the Wavel head:

I found this explanation slightly macabre, until I recently stumbled over this depiction of Katharina von Bora – the wife of Reformation founder Martin Luther. The woodcut is from 1546, the same year Luther died:

This is where the theory of the “dust cover” is starting to crumble – why would the noblewoman and wife of the famous Martin Luther run around with a dust cover, in the middle of a German city? I decided to look further into this.

In the book “Women in Early Modern Europe, 1500-1700” we find this comment on the woodcut of Katharina von Bora:

We do not know whether she and other widows literally bandages their mouth as the portrait show, but the image suggests the power of these ideals. Because chastity, silence and obedience were even harder to achieve for widows, lacking male moral guidance, than for other women, widow were advised to lead quite lives, withdrawn for the world and its temptations, and to devote themselves to prayer.

As we have noticed there are many more depictions of women with covered mouths, in the same fashion as Katharina von Bora. But this idea that a widow should signal chastity, silence and obedience is something that is well spread during this period, and can be recognized in for example the humanist Juan Luis Vives (1492-1540) who proclaimed that:

A good widow ought to suppose that her husband is not utterly dead, but liveth both with life of his soul and beside her with remembrance. Therefore let her live and do so, as she shall think to please her husband—- let her take him for her keeper and spy, not only of her deeds but also of her conscience.

In practice this meant that the general opinion was that women should indeed continue practice chastity, silence and obedience even after her husband had passed, an attitude that is clearly demonstrated in the picture of grief of Katarina von Bora.

The historian Susan Kurant-Nunn noted in the book “Venomous Tongues: Speech and Gender in Late Medieval England” that:

[…] several sixteenth-century German funerary monuments of widows depict them with their clothing pulled up to cover their mouth. Karant-Nunn has interpreted the motif as a symbolic representation of Mundtod(“deadmouth”), the legal principle by which medieval German widows were denied a legal voice or identity but were instead covered by the legal personalitites of one of their male relatives.

Kurant-Nunn have also written the book “The reformation of Ritual, and interpretations of Early Modern Germany” where depictions of widows in attending burial ceremonies have the exact same covered mouths are also mentioned.

According to the book “Representing Judith in Early Modern French Literature“ the common view during the early modern period was that “silence, the closed mouth, made a sign of chastity. And silence and chastity are, in turn, homologous to woman’s enclosure within the house”. Especially silence, and the closed mouth, is during this period accordingly viewed as a social sign of chastity and possibly also religious devotion.

In the book “Widowhood in Medieval and Early Modern Europe” there is yet another passage on the woodcut of Katharina von Bora and her covered mouth:

A powerful image of the mourning widow has survived in the unique portrait of Katharina von Bora entitled “D Martini Lithers nachge-lassene Witfrawn/in ihrer Traurung” (the widow of Martin Luther in mourning). The colored woodcut is dominated by the figure of Katharina wrapped in a black fur coat with a prayer book in her hands. The command for silence is symbolized by a long ribbon, which falls from the hat and ties her mouth.

We now have in print that the woodcut of Katharina states that she is 1) a widow 2) in mourning. In the book “Widowhood in Medieval and Early Modern Europe” the author explains that within both catholic and protestant faith widows were expected to withdraw and lead a pious life after their husband had passed away. Widows were allowed to remarry, but only after one year of grieving had passed. During the 16th century this expectation of a one year abstinence slowly changed from being lawfully binding, into something that was more socially expected from society – especially in protestant countries where nunneries did not exist and was there for not an option for the widows. Instead widows were expected to remarry, but AFTER their period of grief.

Knowing this it seems quite logical that the women with covered mouths are signalling that they are going through a period of grief – symbolizing silence, chastity and inaccessibility to men or to marriage. 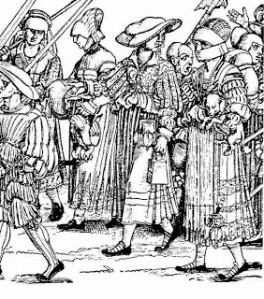 But as we apparently find the same practice among simple low class women in the train of mercenaries (women of low social status hardly famous for their piety or religious devotion), there is reason to believe that the practice occurred among high born as well as low. Possibly during the one year of grief when women were expected to withdraw? And as we all know, deaths among males are quite frequent among military escapades.

Dare we conclude that the two women in the first 1530 depiction probably are soldier widows? I believe we can.

After publishing this entry for the first time in Swedish, I was contacted by some people with even more depictions of women covering their mouths. For example this painting that can be found in the city church of Wittenberg, painted by Cranach d.y, 1569:

What is this picture called? Well: “Resurrection of the Widows son from Nain“.

Also, a very nice English woman sent me these beautiful 16th century memorial pieces from the Stephansdom in Vienna, commemorating different important men and many of their wives are depicted with their mouths covered just the same way as above:

Widow after a husband that died 1574

From the same church, where the husband died 1567.

After receiving this last depictions, I’m starting to wonder if the practice of covering the mouths of widows perhaps is a northern European one, as most of the sources I have are from Austria, Germany & English. At this point I’m still waiting to find evidence of this practice from other parts of Europe during the period – this would not be unlikely as the idea of silence as a female pious virtue is spread all over Europe during the 16th century.

Today I received this picture from a swedish woman. It depicts a noble woman from Meissen in 1577. I asked friends to help me translate the old german text on it and behold, this is what it says:

I dare say that my case just might be closed… 😉

Suggested further reading, for the curious:

→ From Wives to Widows in Early Modern Paris

11 thoughts on “The covered mouth of women”

Join 70 other followers
Follow The Vulgar Crowd on WordPress.com